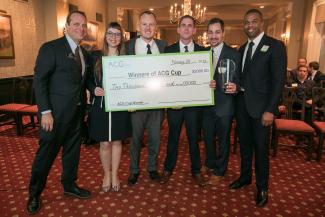 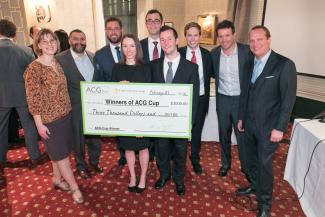 The Distinguished Alumni Award was sponsored by Hilliard Lyons

The 9th Annual ACG Cincinnati Case Study Finals were held on February 24, 2016 in front of a capacity crowd at the University Club.  Emceed by Woody Taft, the event was distinguished by an unscheduled appearance by presidential candidate, businessman and reality tv star, Donald Trump, who provided the audience with his take on the case study.  Each team was well-coached and ready for a barrage of withering questions from the distinguished panel of judges. Highlights of team presentations included a "reverse triangular merger" proposed by Team UC; snappy one-liners from Team XU and well-articulated liquidity implications by Team MU.  This year's competition also included audience participation through an innovative online event engagement tool - KiwiLive - to provide immediate feedback on the presentations. With such competitive teams, it was difficult of the judges to choose a winner.  We congratulate Miami for nosing out the win.

Although arctic weather had the city shutdown, the competition was hot at the 2015 ACG Cincinnati Cup finals on the evening of February 19.  Over 150 guests braved the elements to catch the cup, the chapter’s equivalent of the annual cross-town match-up.  The distinguished panel of judges - playing the role of the board of directors and owners of a fictitious family-owned business – challenged the wits of each team with complex questions.  After a difficult deliberation, the Cup was awarded to team from Miami University.  Congratulations Red Hawks!

Over the 8 year history of the competition, the teams and alumni from the MBA programs of Miami University, University of Cincinnati and Xavier University have developed quite a rivalry.  The cup enjoys strong support among the chapter’s members with a robust group of mentors serving in an advisory capacity for each team.