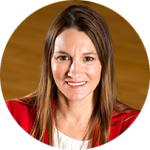 Gretchen Sheirr was named President of Business Operations of the Houston Rockets in May of 2021 following her 20th season with the team.  In addition to running the day-to-day business functions for the Rockets, she oversees the team’s home arena, Toyota Center, which is one of the premier live entertainment venues in the nation.

Sheirr began her stint with the Rockets as an account executive and worked her way up, holding titles including Vice President of Sales & Service, Chief Revenue Officer, and Chief Operating Officer.  Early into her career, Sheirr spearheaded the implementation of a private-label ticketing venture, now known as AXS Ticketing, which garnered success for both the Rockets and Toyota Center.  Her comprehensive understanding of ticketing strategy and ability to forecast industry opportunities along with a commitment to digital innovation and fostering strong relationships within the Houston business community have been vital to the organization’s success.

In her first year at the helm, Sheirr guided the organization through post-pandemic challenges as full capacity live events returned.  Toyota Center hosted a record number of events during that time, including UFC 262 in February of 2022, which posted the highest grossing revenue in the history of the venue.

Sheirr has also focused on bolstering the organization’s commitment to serving the Houston community through the team’s Clutch City Foundation by leveraging sponsorships and relationships into new projects and opportunities.  In April of 2022, the Rockets hosted a unique charity experience called “Rockets Runway” to showcase the team’s new Boeing 767 plane and to raise funds and awareness for those in need.  Under Sheirr’s leadership, the Rockets partnered with Memorial Hermann and the City of Houston to renovate community basketball courts and learning centers at Moody Park as part of the organization’s commitment to enhancing the lives of Houstonians through the game of basketball.

A native of Spring, Texas, Sheirr graduated from Louisiana State University with a degree in marketing. She also was a four-year letter winner as a diver for LSU.  In 2017, she was named one of Sports Business Journal’s Forty Under 40, which annually recognizes the top young professionals in sports business.

Sheirr is a founding board member of WISE Houston, serves on the March of Dimes Houston Board, and is a member of the Executive Women’s Partnership.  She and her husband, Ken, have twins, Zachary and Jordan, and live in The Woodlands.