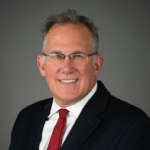 Augustine (Gus) Faucher is senior vice president and chief economist of The PNC Financial Services Group, serving as the principal spokesperson on all economic issues for PNC.

Prior to joining PNC as senior macroeconomist in December 2011, Faucher worked for 10 years at Moody’s Analytics (formerly Economy.com), where he was a director and senior economist. He was responsible for running the firm’s computer model of the U.S. economy, edited a monthly publication on the U.S. economic outlook, covered fiscal and monetary policy, and analyzed various regional economies. Previously, he worked for six years at the U.S. Treasury Department, and taught at the University of Illinois at Urbana-Champaign. He was named senior vice president in March 2015 deputy chief economist in February 2016, and to his current role in April 2017.

Faucher is frequently cited in international, national, and regional media outlets including The Wall Street Journal and The New York Times. He has appeared on ABC World News, CBS Evening News, NBC Nightly News and Nightly Business Report, and is regularly featured on CNBC, CNN and Fox Business. In addition, he appears regularly on CBS Radio, NPR and Marketplace.

He serves on the board of directors of The Economic Club of Pittsburgh - the local chapter of National Association of Business Economics (NABE). He is also co-chair of the Financial Roundtable of NABE.

**By attending this event, YOU VOLUNTARILY ASSUME ANY AND ALL RISKS ASSOCIATED WITH POTENTIAL EXPOSURE TO COVID-19 (CORONAVIRUS) and YOU HEREBY RELEASE, WAIVE AND HOLD ACG HARMLESS FROM ANY ILLNESS, INJURY OR DAMAGES INCURRED BY YOU IN CONNECTION WITH YOUR ATTENDANCE AT THIS EVENT.