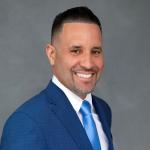 His executive leadership style has been characterized as, dynamic, and motivating and is known to possess a coaching mentality. This leadership style has afforded him the ability to transform operations, develop professionals in all areas of club disciplines, forge a path to deliver an improved dining experience, and enhance the culinary creativity at his current club.

By Invitation Only for ACG St. Louis Corporate Members

Join us for the next ACG St. Louis Corporate Peer Group meeting on Tuesday, May 10th at Bellerive Country Club.  Carlos, General Manager and CEO of Bellerive Country Club, will share details of the recent improvements to the club and it's plans to host the President’s Cup in 2030.  Corporate Peer Group members will have the opportunity to network with each other prior to the presentation.

The ACG St. Louis Corporate Peer Group is an exclusive, invitation-only group comprised of senior-level corporate executives and corporate development professionals. The objective of the group is to provide a network where members can exchange ideas, challenges, and best practices amongst peers.

This meeting is being hosted by Mr. Jeff Giles.