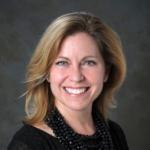 Catherine (Cat) Neville is the Vice President of Communications for Explore St. Louis. In addition to guiding media relations and communications activities in collaboration with the marketing, sales and operations team, she serves as a spokesperson for the organization and conducts media outreach to regional and national travel, lifestyle, culinary and convention outlets.

As co-founder of both Sauce Magazine (1999) and Feast Magazine (2010), Cat has been a non-stop force in the St. Louis community. Her accomplishments include developing Feast TV, an Emmy-winning regional half-hour program that ran for seven seasons; launching Emmy-nominated tasteMAKERS on public television nationally in October 2018; and joining the team at Hermann Farm in 2021 as curator to build the 200-acre historic site into a national-level farm museum and gathering place to support and promote the food, farming and beverage industries.

During her career, Cat has won eight Mid-America Emmy Awards and was named one of Folio's Top Women in Media in the Entrepreneur category. She also was twice awarded Lee Enterprises President's Award for Innovation and won an Eddie Award for feature writing, in addition to being named Media Person of the Year by the Missouri Restaurant Association, and one of St. Louis' 30 Under 30 by the St. Louis Business Journal.

Guests are welcome!  Do you know a woman that would make a great addition to ACG?  E-mail their information to acgstlouis@acg.org and we will send them a personal invitation to this event.  The women members of ACG will make a special effort to make your guest feel welcome.