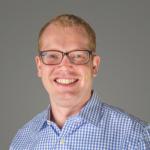 Landon Hobson is the CEO of Cosmos Corporation. Cosmos does new product development, manufactures, markets, and sales for three global pet care brands – TropiClean, Naturel Promise, and Urine Off.  Founded in 1980 by Don Kassebaum Sr., the company started as Winslow Distributing and sold beauty supplies to salons. In 1984, the company transitioned to selling similar products for pets. Cosmos also funds a nonprofit organization called Gifts of Love International, which has built an orphanage and school, feeds thousands, and provides homes for many in countries such as Guatemala, Haiti, the Congo and beyond.

Seven Kassebaum family members work at the company today, including Hobson, the son-in-law of Kassebaum brother Don.  Landon is originally from North Carolina where he lived 25 years of his life, moved to New York City for 5 years to work and complete a master’s degree at Columbia University. Landon lives in St Charles County with his wife Nikki and two boys: Charlie and Henry.

ACG Member from Another Chapter: $0