Join us on September 17 for a virtual networking event featuring a presentation on The State of the Capital Markets, which will explore the current national deal activity and impacts of debt pricing in the markets. Following the presentation, attendees with be broken up into breakout rooms for small group discussion and networking. 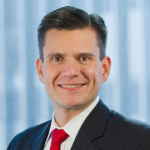 Adam is a senior member of the Syndicated Finance Group, and leads the New York team which covers the Northeast and Southeast Middle Market Segments. Adam has over 25 years of banking and corporate finance experience with JPMorgan Securities and its predecessor organization, Chase Securities. He also spent three years at Loughlin Meghji + Co. as a founding member of its Corporate Finance practice. Adam originally joined Chase Securities in 1995 as an analyst in the Investment Bank’s Chemical Industries Group. Upon promotion to Associate he transitioned to a focus on financing private equity-related transactions, first with the Financial Sponsor Group and later with the Leveraged Finance Group. After 13 years in JPMorgan’s Investment Bank, Adam joined Loughlin Meghji + Co. in 2008 to build that firm’s new Corporate Finance practice. He was recruited back to JPMorgan in 2011, this time in the Commercial Bank, for his current role leading the New York team of the newly formed Syndicated Finance Group. Adam holds a Bachelor of Science in Finance from Lehigh University and a Master of Business Administration from Columbia University.