Connect with ACG Boston and New England's deal professionals at our bi-monthly Networking Breakfast, where the region's middle-market M&A community comes together to network and hear high caliber industry experts share their outlook, opinions, successes and failures in M&A. 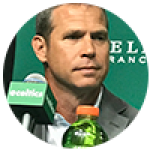 Rich Gotham is in his 15th season with the 17-time world Champion Boston Celtics and his 10th season as team President.  In this role, he is responsible for all aspects of the Celtics business operations including sales, marketing, customer service, corporate partnerships, business development, game entertainment, community engagement, communications and public relations, broadcast partnerships, arena relations, and real estate matters. In addition, he works closely with Celtics ownership, basketball operations staff, and the NBA on basketball related matters, as well as team and league initiatives. He succeeds Arnold “Red” Auerbach as Celtics team President, and serves on the NBA Board of Governors. Prior to being named Team President, Rich served as the team’s Executive Vice President and Chief Operating Officer.

Since joining the Celtics in 2003, Rich has been recognized for leading the team to new heights off the court while growing team revenues by over 300%. Under his leadership the team has established new records for attendance, ticket sales, sponsorship, merchandise, and television ratings, contributing to the team’s first NBA Championship in twenty-two years in 2008, as well as six division titles, four Eastern Conference Finals, and two NBA Finals appearances. In addition, he led negotiations for the construction and naming rights for the new state of the art Red Auerbach training center in partnership with New Balance, as well as a long term lease extension with the TD Garden.  Rich also negotiated a long-term media rights and equity partnership with Comcast SportsNet, one of the largest such deals in NBA league history, and most recently negotiated the NBA’s largest jersey patch sponsorship with GE.

Rich and the Celtics have been widely recognized as thought leaders in the business of sports and the team’s business achievements under Rich’s direction have been chronicled by The Wall Street Journal, The New York Times, The Harvard Business Review, Investors’ Business Daily, Bloomberg, Reuters, CNBC, and Fox Business News. During the 2008-2009 season the Celtics were recognized as the top franchise in all of professional sports by The Sports Business Journal. With 13 million social media followers, the Celtics have pioneered sports digital marketing and fan engagement, aggregating the second largest digital following in all of North American Sports.

Under Rich’s guidance, the Celtics have significantly increased their efforts to help children in need throughout New England and their programs have been recognized by The White House and US Department of Education. With over 200 events and 140 player appearances annually, the Celtics lead the NBA in community engagement with initiatives that impact over 20,000 children each year. In addition, Rich is very active in multiple charitable and fundraising initiatives on behalf of the Boston Celtics Shamrock Foundation, for which he is a board member.

Rich joined the Celtics after a fifteen year career in the tech industry, including five years with the global internet media company, Lycos, where he served as Vice President of Sales and Business Development and was responsible for generating revenues in excess of $300 million annually. While at Lycos, he was part of a senior-management team that exceeded Wall Street analyst expectations for revenue and profitability growth for nineteen (19) consecutive quarters and played an integral role in helping to grow the Lycos Network into the most visited web site on the Internet in 2001. In addition, he sat on the Board of Directors for the Internet Advertising Bureau participating in the creation of multiple new internet advertising standards that are still in place today.

In addition to his duties with the Celtics, Rich currently serves as a board member for The Greater Boston Chamber of Commerce, The Make-A-Wish Foundation, and the Board of Trustees at Providence College, his alma mater.

Rich currently resides in Medfield, MA along with his wife, Kara, and their three children.

Online registration is now closed. Walk-ins are welcome at the door for an additional fee.

Attendees include M&A professionals from: