ACG partners with PitchBook on US PE Middle Market Report 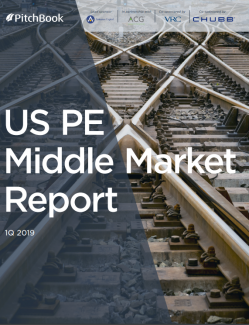 The 1Q 2019 US PE Middle Market Report highlights myriad factors that curbed dealmaking levels and stalled liquidity events in the quarter. These include distress in the high-yield and leveraged loan markets in 4Q, an inauspicious pricing environment and the longest government shutdown in history. Both MM deal and exit activity seem poised to rebound, however, as market tranquility was restored in the first quarter and as GPs circumvent market pressures with deal strategies such as add-ons and sale-leasebacks. MM fundraising levels remained aloft as LPs continued allocating capital to private equity at a rapid pace and as fund sizes continue to scale, which will likely bolster deal and exit sizes down the line. This edition also spotlights PE activity in China as the country looks set to play an eminent role in the PE industry.

1Q 2019 middle-market (MM) dealmaking activity slowed compared to 2018’s record pace, and cumulative value declined as PE firms closed on smaller deals. Financing costs were prohibitive due to distress in the high-yield and leveraged loan markets during 4Q 2018, prompting numerous GPs to push back deals. Despite the lower deal value, multiples remained elevated as competition continues to be fierce and technology—which typically trades at higher multiples—accounts for a swelling portion of deal flow. GPs, though, are combating these pressures by utilizing dividend recapitalizations (recaps) and sale lease-backs, among other strategies, to boost returns. Exits, on the other hand, saw declines in count and value as GPs were reluctant to sell in an adverse pricing environment. Public markets in the US declined meaningfully in the quarter, causing mark-to-market losses that many GPs would loathe to realize.

The decline in markets, coupled with the longest government shutdown in history, meant 1Q was devoid of MM PE-backed IPOs for the first quarter since the global financial crisis (GFC). An unremitting market recovery in fixed-income and public equity markets during the first quarter leads us to believe exit activity will pick up throughout the year. Despite declines in deal and exit value, fundraising figures remained steady in the quarter. LPs continue to allocate to PE at a record clip, boosting MM fundraising. Funds—within and above the MM—continue growing in scale, with vehicles between $1 billion and $5 billion accounting for over three-quarters of capital raised in the MM. This proliferation of massive funds will have downstream effects, likely leading to larger deal and exit sizes. As fund sizes grow persistently, GPs with a history of raising mega-funds ($5 billion+) continue to return to the MM with smaller, more-focused funds.

This report was produced in partnership with ACG and is sponsored by Antares Capital, VRC and Chubb.