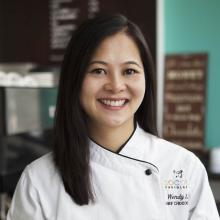 Wendy Lieu is the Co-Founder and CEO of Socola Chocolatier, an award-winning San Francisco chocolate company. Socola is the word for "chocolate" in Vietnamese, honoring her parents who fled Vietnam in 1981 as Boat People, landing in a Malaysian refugee camp where Wendy was later born. Her Vietnamese heritage is reflected in her product flavors and grit to pursue her dream.

In 2001, Wendy, 19, taught herself how to make chocolate truffles and began selling them in front of her parent's nail salon in Northern California along with her sister Susan, 16, during the summer farmer's market. After college, Wendy became a management consultant, moonlighting as a chocolatier after hours, juggling pastry school and spreadsheets at night. In 2011, Wendy began working on the company full-time and in 2014, opened her San Francisco storefront where she makes Asian-inspired truffles, chocolate bars, and other treats in small batches. She is known for her durian and phở truffles, chocolate mooncakes, and the Little Saigon Box.  Socola has been featured in Forbes, NBC News, the San Francisco Chronicle, and Zagat, and has a client list that includes Google, Tiffany, Sephora, and American Express.

Wendy is the recipient of the National Association of Women Business Owners Aspire Award, PAAWBAC Monarch Leadership Award, Renaissance Entrepreneur of the Year and Center for Asian American Media Rising Star. She is a graduate of UC Davis, Tante Marie Pastry School and the Renaissance Entrepreneurship Center. In her free time she serves as a board member for the East Cut Community Benefit District and teaches other small business owners at Renaissance. She lives in San Francisco with her husband, two children, and collection of alpaca stuffed animals.

Pivot Or You’re Out: The Next Evolution for Restaurants, Food and Beverage Companies