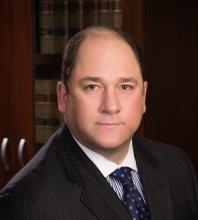 (August 20, 2019 - Detroit) – When Eric Lark became chair of the Business Law Section of the State Bar of Michigan in 2005, he voiced his firm belief that those business attorneys most responsible for the strength and excellence of the Michigan business bar should be recognized by the Section with an award.  That idea led to the Section establishing the Stephen H. Schulman Outstanding Business Lawyer Award to honor those business lawyers who, over their careers, have made a tremendous positive impact on Michigan business law, business lawyers and the Section.

Little did Lark know that one day he would receive the Schulman Award.

Lark, a member at Kerr Russell & Weber, PLC in Detroit, has been named the recipient of the 14th Annual Stephen H. Schulman Outstanding Business Lawyer Award by the State Bar of Michigan’s Business Law Section. He will be honored at the Schulman Award Ceremony, held in conjunction with the Section’s Business Law Institute and Annual Meeting, on October 4 at the Amway Grand Hotel in Grand Rapids.

The Northville resident joined Kerr Russell in 1991 and became involved with the Section in the late 1990s. Lark has more than 25 years of experience in the areas of business/corporate law, mergers and acquisitions, corporate finance, private equity, real estate law and captive insurance law.  He’s licensed to practice in Michigan, Illinois and the District of Columbia.

“When the Schulman Award was conceived, I envisioned that it would honor the long-time, recognized leaders, the gurus if you will, of the Michigan business bar,” Lark said.  “There were so many obvious choices in the beginning.  The honorees were sages of the industry who had been instrumental to Michigan business law for decades, in some cases stretching back to before I was born.”

“I hardly consider myself a business law guru and I’m not that old, so I’m not sure how this happened,” Lark added. “Nevertheless, I am deeply humbled and honored to receive the award.”

Lark first became involved with the Business Law Section through the encouragement of fellow Kerr Russell member and former Schulman recipient Jim Cambridge, who served as one of Lark’s mentors early on. In addition to serving as Section chair, Lark has been director of legislative review, director of programs, vice-chair, treasurer and secretary for the Section. Beyond the leadership positions he has held with the Section, Lark has been instrumental in helping to plan programs available through the Business Law Institute and the Institute of Continuing Legal

Education (ICLE).  He is also a frequent speaker on various business law topics. Lark earned his law degree from Wayne State University and his B.B.A. in finance from the Ross School of Business at the University of Michigan.

Like other lawyers in the field, Lark believes that being involved with the Section has helped him develop skills and form professional and personal relationships that have been invaluable over the years.

“The biggest rewards for me have been the relationships developed, and the sharing of knowledge and ideas with my peers in the business law arena,” Lark said. “It’s both surprising and wonderful that most of my closest relationships from the Section are also my direct competitors.”

When Lark set about creating the award in 2005, his long-time friend, colleague and fellow Schulman Award recipient Daniel Minkus from Clark Hill suggested naming it after Stephen Schulman.  Lark offered little debate.  As a law student at Wayne State, Lark took Professor Schulman’s corporations class and Schulman’s (and Professor Alan Schenk’s) Business Planning class, easily the “best course I have ever taken, despite the grueling 48-hour take-home final exams,” he said with a laugh. Lark also interned with Schulman and later worked with him in other professional capacities.

“Beyond being an outstanding professor, Stephen Schulman was well known for his work on behalf of the Section, for writing legislation, books and articles, working as an expert witness and more,” Lark said. “He had an amazing impact on our field. It was a no-brainer for us to name the award in his honor.”

Indeed, long before the award was named after him, Schulman received the Donald H. Gordon Award for Excellence in Teaching and was chosen by the Wayne State law student body as the school’s Professor of the Year several times. Schulman was also instrumental in the drafting of much of Michigan’s corporate law that is still in place today.

Lark has been recognized by Chambers USA – America’s Leading Lawyers for Business, ranks among The Best Lawyers in America®, and is rated a “Michigan Super Lawyer” by Thomson Reuters. Lark holds the LexisNexis Martindale-Hubbell AV Rating, reflecting preeminence in legal ability and overall professional integrity. He is also recognized as a “Leading Lawyer” in Detroit and a Top Attorney in Detroit by DBusiness magazine and Crain’s Detroit Business. Lark was recently named the 2019 Best Lawyers in America® “Lawyer of the Year” for Detroit in corporate law.

In addition to his professional accomplishments and his work on behalf of the Section, Lark has served on many boards, committees and in other leadership capacities, including with Kerr Russell. He is also deeply involved in his community, including serving on the Northville Township Planning Commission since 2013 (chair from 2016-18), the Northville Township Zoning Board of Appeals since 2016, and his subdivision’s homeowners association where he has been president and board chair since 2002.

Lark credits his wife Mandy, his two children, and Kerr Russell for supporting his pursuit of Section responsibilities and other professional interests over the years.  He also credits his parents, Mary and Jim Lark (a 1955 Georgetown Law graduate better known for his legendary restaurant, The Lark), for their abiding support and encouragement.

Thinking back on his many years of involvement with the Business Law Section, Lark is further humbled by what he has gained from the Section personally and professionally. “I can promise you that I’ve received much more from the Section than I could ever hope to give,” he said.

The Business Law Section established the Stephen H. Schulman Outstanding Business Lawyer Award in 2006, to be presented annually. The prestigious award honors Michigan business lawyers who consistently exemplify the characteristics the Business Law Section seeks to foster and facilitate: the highest quality of professionalism, the highest quality of practice, and an unwavering dedication to service, ethical conduct, and collegiality within the practice of law.

About the Business Law Section:

The Business Law Section of the State Bar of Michigan provides education, information and analysis about issues of concern to its approximately 3500 members through meetings, seminars, its website, public service programs, legislation and publication of a professional journal. Visit www.michbar.org for more information.

Schulman had a significant impact on the lives and careers of thousands of future attorneys during his tenure at Wayne State University Law School. There he taught courses in corporations, business planning, administrative law and more. In addition to receiving the Donald H. Gordon Award for Excellence in Teaching, his students selected him multiple times as the school’s Professor of the Year. Schulman served as faculty advisor and regular contributor to The Wayne Law Review for several decades and was co-reporter for the Business Law Section’s Subcommittee on the Revision of the Michigan Business Corporation Act (MCBA). Schulman passed away in 2000.

Kerr Russell is proud of Detroit. They’re also proud to be one of Detroit’s oldest law firms having been here since 1874.  Kerr Russell is driven to deliver results and make a difference. They take on their clients’ perspectives to improve their clients’ lives and businesses. Kerr Russell’s legal solutions are prompt, accurate, economical, and focused on their clients’ needs in almost every area of the legal profession, including business law, labor and employment, immigration, mergers and acquisitions, cybersecurity and data privacy, real estate and construction, health care, medical malpractice, tax, contract negotiation, restructuring, automotive, manufacturing, and commercial litigation.

Whereas many lawyers merely interpret the law, Kerr Russell attorneys help make it. They’ve played a role in some of the most significant legal developments in state business and health care law, and their trial lawyers have been involved in many notable commercial cases in Michigan and other jurisdictions. In business and legal circles, Kerr Russell is respected for their high standards, quality work, and professional ethics and integrity. For 145 years, Detroit has been Kerr Russell’s home. Detroit will always be Kerr Russell’s home.