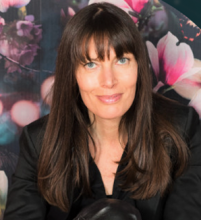 Shira Berk began her career working in public relations for some of America's most prominent magazine brands (Rolling Stone, US Weekly) and alternative record labels.  After more than twenty years, she left her last corporate role as the VP of Communications at TV Guide to pursue a new path.

Berk began to shift her creative energy into making great tasting treats at her small Goodie Girl Cafe in Tribeca.  A self-trained baker, with bold instincts for all things alternative, Shira spent hours experimenting with countless bags of crazy flour varieties to create her ridiculously delicious cookies using all natural, better-for-you ingredients. She was surprised to find that her quinoa-based chocolate chip cookies were an even bigger hit with her customers than the regular chocolate chip cookies. With decades of experience in trendsetting businesses, Shira knew that she was onto something.

In 2010, she decided to take the plunge headlong into the food world.

A self-professed foodie who used to do publicity for punk rock bands, Shira was confident that she could design a great product, but with no expertise in the food industry, she knew she needed to surround herself with the right people. In 2014, Berk joined The Entrepreneur’s Space, one of the first food incubator programs in New York City, to make Goodie Girl Cookies a real thing. That same year, Goodie Girl won a booth at the Fancy Food Show through a competition co-sponsored by The New York Economic Development Corp. and the Specialty Food Association. At the trade show she met her bakery partner who helped her make Goodie Girl a reality.

Shira’s relentless approach to networking and dedication to making the best-tasting natural cookies enabled her and her amazing team to land distribution in many of the most prominent retailers nationwide, including Walmart, Target, Whole Foods, Wegmans, Kroger, and Publix. And in 2020, Goodie Girl took flight on board JetBlue joining their roster of complimentary inflight gluten free snacks.

A mother of three, Berk is a huge fan of the arts and can often be found either dragging her teenagers through a NYC museum, or at a punk rock show in Brooklyn.  She is a frequent podcast guest and panelist on topics including entrepreneurship, aesthetic intelligence, better-for-you eating trends and has appeared on shows ranging from Sirius XM’s “Tastemakers” to Entrepreneur Magazine’s “How did you fix that?” She lives in Tribeca and works in NJ!