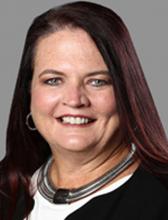 Maureen Hanlon is the president of Onexim Sports and Entertainment Holding USA, Inc., the ownership company pf BSE Global.   Maureen oversees Onexim’s investments and ownership interests in the Brooklyn Nets, Barclays Center, NYCB Live home of the Nassau Veterans Memorial Coliseum, Webster Hall, the downtown Brooklyn Paramount Theatre as well as BSE Global’s live-work-play mixed use development at NYCB Live, Nassau Hub.    She also serves on the Board of Advisory Directors for the Brooklyn Nets and Barclays Center, and acts as a liaison to Onexim’s headquarters in Moscow.

Maureen had more than 25 years of experience in legal practice prior to joining Onexim. She previously was a partner at Hogan Lovells US LLP where she assisted her clients in acquisitions, joint ventures, and commercial transactions in the sports, media, and entertainment industries. While at Hogan Lovells, Hanlon served as primary outside counsel to Onexim for eight years and served for many years as outside counsel for 21st Century Fox and News Corporation.