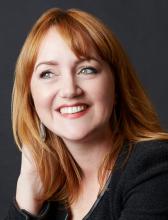 When Rebecca was 11 years old, her big sister allowed her do her makeup for her prom. The fact that she didn't run to the bathroom to wash it all off set off a signal within the young Ms. Perkins. She had skills... For nearly 20 years, those skills have been highlighted in various platforms (film, television, red carpet) and on all types of women including Mariska Hargitay, Amanda Peet, Ellen Page, Gloria Steinem, Julianna Margulies and SHESPOKE partner and co-founder Stephanie March. Rebecca and Stephanie met on the set of Law & Order: SVU, where Rebecca was head of the Makeup Department. Soon enough, they were plotting their future makeup venture, which became SHESPOKE. Rebecca, who has also worked on 30 Rock, Smash, Elementary and NBC's upcoming The Village, lives just north of Manhattan with her husband and two boys, with whom she shares her three passions - traveling, cooking and ultimate Frisbee - as often as she is able. Says Rebecca: "I firmly believe that the right red lipstick can dramatically up your confidence in five seconds, flat."